In The Medical Malpractice Debate, Words Do Matter

There has been a intense battle in the United States for more than four decades over so-called medical malpractice “reforms” that has received insufficient press coverage and inadequate public outcry, especially since anyone may become an unsuspecting victim of medical negligence at any time and without warning, devastating not only their own lives but also harming their families (if the “breadwinner” of a family suffers permanent injuries due to medical negligence that prevents him/her from returning to work, the entire family suffers not only emotional trauma but also financial ruin).

The Powerful Health Care Industry Has A Shared, Common Financial Interest That It Seeks To Protect; Medical Malpractice Victims Are a Diverse Group, With Not Much In Common Except That They Were Caused Immense Harm By Negligent Medical Care

Because the often one-sided debate over victims’ rights to seek and obtain fair and adequate compensation for their losses due to medical negligence is controlled by the self-interested, well-organized, financially-dominant, and politically-powerful health care industry, the health care industry controls the manner in which the process of medical malpractice compensation is attacked and restricted.

The health care industry includes health insurance companies, medical malpractice insurance companies, hospitals, and many other medical providers such as physicians, who have their own politically-active lobbyists who are paid huge sums to represent their interests in reducing or eliminating their financial responsibility to compensate their innocent victims of medical malpractice who suffered often life-changing, catastrophic injuries through no fault of their own.

The health care industry often attempts to excite the public by using the phrases “frivolous lawsuits” and “runaway jury verdicts” in trying to fashion a need for unnecessary restrictions on the right of medical malpractice victims to be fully compensated by those who committed the harm.

The Merriam-Webster dictionary defines the word “reform,” when used as a noun, as “amendment of what is defective, vicious, corrupt, or depraved; a removal or correction of an abuse, a wrong, or errors .” So, by definition, when the proponents of restricting medical malpractice victims’ right to be fairly and fully compensated for their losses by those who harmed them use the phrase “medical malpractice reform” or “tort reform,” they are categorically espousing their selfish belief that our fair and just system of compensating victims of other people’s negligent acts or omissions, which has been the accepted and successful standard for hundreds of years, is abusive, corrupt, depraved, defective, and vicious.

Perhaps one reason why the health care industry gets away with attacking our time-honored system of compensating tort victims is that the health care industry is well-organized, well-financed, and speaks with a single voice; on the other hand, medical malpractice victims have many different, distinct voices, all of which are drowned out by the siren song of “tort reformers.”

The Merriam-Webster dictionary defines the word “crisis” as “a difficult or dangerous situation that needs serious attention.” The health care industry uses the phrase “medical malpractice crisis” when honing its argument that state legislatures must urgently impose financial and other restrictions on the rights of medical malpractice victims to be fairly and fully compensated for the harms they suffered because the word “crisis” manifests a situation that requires immediate attention to avoid the devastating consequences of inaction.

Many people react to the word “crisis” by deferring intellectual evaluation and declining proof of a situation that needs immediate attention, thereby providing criers of “crisis” with the necessary impetus to obtain special treatment and financial protection from state legislators who are more than willing to bend to the desires of health care industry lobbyists pushing their one-sided agenda, without equal or objective consideration of the harm done to victims of medical malpractice when their rights are restricted.

The health care industry loves the word “cap” because it conjures “a natural cover or top” in the minds of  people, as the word “cap” is defined in the Merriam-Webster dictionary. The health care industry needs for ordinary people to think that the “cap” on damages in medical malpractice claims is “a natural top.” However, there is nothing natural about causing victims of medical malpractice to receive less than what they should be entitled to solely to financially benefit the health care providers who wrongfully injured them.

The health care industry loves to publicly argue that doctors practice “defensive medicine” because they fear being named as medical malpractice defendants if their patients suffer unanticipated events as a result of medical treatment (or the lack of treatment). The connotation of “defensive medicine” is that it is unnecessary.

In a recently published article entitled “Does ‘Defensive’ Medicine Differ From ‘Careful’ Medicine?,” the author asks, “What motivates a physician to order a specific test? Ruling out serious problems and referral to specialists often benefits patients, gives them peace of mind, and can be justified. But to what extent is the doctor’s decision influenced by fear of being sued?” The author notes, “Much of what’s been called “defensive medicine” occurs in emergency departments. Emergency department physicians argue they need to test extensively so they won’t miss serious diagnoses, such as heart attacks, strokes, and blood clots, which can be fatal. After all, these doctors don’t have ongoing relationships with patients and worry that many won’t get the follow-up care they recommend. Emergency department physicians rightly fear that they’ll be sued if a patient’s condition deteriorates after discharge. It’s hard to draw a line between being appropriately cautious and being overly aggressive.”

Our Biggest Threat Comes From A Powerful Industry

One of the most important traits and strengths of us as a democratic country is that we stand for the proposition that the less politically powerful have the same legal protections and rights as the most politically-connected and powerful.

The U.S. Constitution, and state constitutions, grant and protect equal protection of the law and the right of due process to all citizens. Destructive and special-interest laws, such as medical malpractice “reform” laws that place “caps” on the amount of damages that may be received by medical malpractice victims and which may otherwise restrict and impede the rights of medical malpractice victims to seek and obtain fairness and justice in our courts of law by unbiased juries whose decisions are respected and enforced in full, are un-American, even if the health care industry despises the authority and sanctity of our jury system.

That justice is blind (that is, justice is equal to all) is of no small importance to us: the symbol of our country’s cornerstone of justice and fairness for all is “Lady Justice,” who is depicted with a blindfold and holding the equally balanced scales of justice: as William Penn so eloquently stated, “Justice is justly represented blind, because she sees no difference in the parties concerned. She has but one scale and weight, for rich and poor, great and small.”

Words Matter, But The Words In Medical Records Are One-Sided And Self-Serving

Throughout history, the person who writes the records controls the conversation. The same is true for medical records, which are authored solely by medical providers and are not reviewed by patients for accuracy or truthfulness: 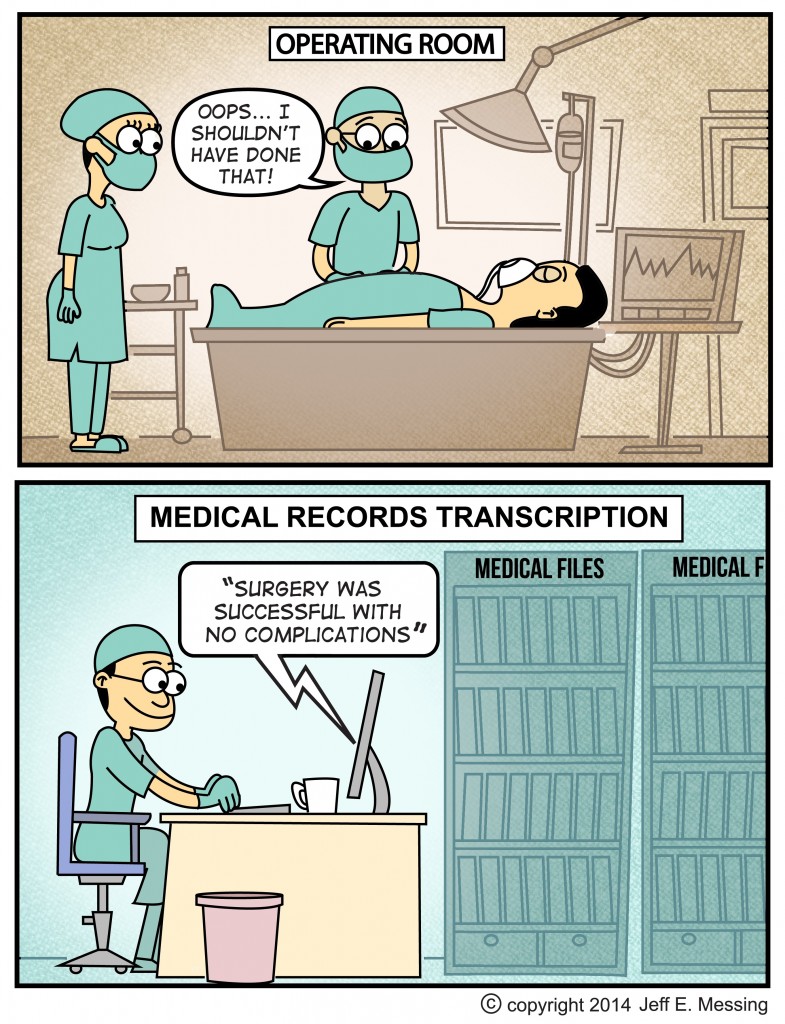 Visit our website to submit a short, secure form, or call us toll-free in the United States at 800-295-3959, to find medical malpractice attorneys who may assist you.